I'd appreciate any help!
Walter

I have an old 412GS straight cabinet that I'm trying to find a date on...I pulled a speaker which is dated 1976...is there a serial number, stamps or anything that will help
Thanks, Bill

Used it briefly, because a tube red plated shortly after receiving it, and there was smoke. It was sounding good.

Tbh, I never plug in amps anymore. I think it would be good to get all them
serviced by a person who knows these models. A few of them sound good, a few don’t. I run a little electricity through them all every few years or so.

My interest in the mentioned head is due to an anomaly. The feet on the base are small round rubber donuts, probably secured by a screw. IIRC they seemed not out of place, and there were no footprints or signs that any other pads were mounted there. Every MM head I have seen or owned has the big rubber pads. Since this is a very early serial number, I am asking if anyone else has seen such a head?

Another question would be is there anything to the rumor being circulated here and there about there existing some early 65 130 style HD models which had a genuine tube pre-amp? This is being mentioned on some guitar forums and I thought that this place would have the lowdown. The story being put forth, by a person or two who seem to know these amps well, and who are apparently familiar with both the tube and transistor designed PI SS front ends, is that there do exist some first run amps which use true tube preamplification. And that they are rare, so don’t expect to see one. Does anyone have the last word on this rumor?

eta: I just searched the forum and saw that Steve did answer this part of my question for a guy who was asking about the PI tube in regard to 150s vs 130s and are there any true tube preamp MM amps etc.... This subject probably gets beat to death.
It persists in my head because of the supposed MM amp awareness the person putting the story out seems to have, and that he stated the ‘very early/very rare’ mantra. There is nothing ‘rare’ about a tube phase splitter in 65s and 130s...not even a little bit rare. idk.

BTW the new board looks great. I have checked in from time to time and it seemed the board was shut down for a while, not sure. This is my first visit in years. Thanks, Steve, and all involved.

I sold MM's in the 70's and I never saw a tube front end in any of them but that was around 77 though. Mike.

My HD 130 reverb has the serial number B005385 can anybody shed any light on that? It also has a plate on the back saying Strawberry Studios
I am of the opinion it is a 1974 amp and cab and it is in immaculate condition and I have not moved it out of my mancave for 20 years but I fired up 6today and it was fine except for the smell of burning dust off the valves for the first few minutes I can confirm it has a 12AX7 PI chassis number is a 2275 130

I am assuming that the amp

I've had issues with the tremolo (weak effect with a strong "thumping" sound in time with the beat of the tremolo) and am currently having a hard time getting clear information on what to check or repair. I've got it to a tech, but he isn't coming up with anything and isn't sure it's a problem. To me the tremolo is just unusable. 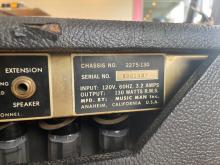 Does it have 12ax7 PI tube or SS driver. That helps date them. Trem, there is an adjustment on the main board that CAN solve SOME problems unless it has a cap bad or something else. Mike.

trying to date my MM combo

Hi guys, this is my first visit to this great site! Greetings from Lancashire, England!
I have a 112 RP 65 - the chassis number is 2165 RP and the serial number is DN00306.
Is there any way I can get an accurate date from this information?
Any help/advice would be much appreciated.

Hi Mark,
If you open up the chassis and pull it out, you may see a date written on the printed circuit board. That is the inspection date...
The Transformers also have an EIA date code.
The EIA code for Schumacher Transformers typically used in Music Man Amps is 606
The next number is the year.
The next two numbers are the week of the year. 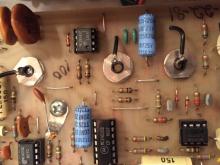 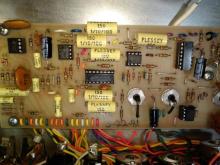 posted my 110Rd Fifty on market place and someone send message saying its a reissue. i bought this in pawn shop about 20 yrs back. Ser EN00191 Chassis 1650 RRD. weight 35# , i bought a MM 112 new in about 83, loaned it a client, touring blues musician, need to get it back one day. it was heavy amp too