I've been ordering and installing grill cloth from Speakerbuilderssupply.com ... they have a product called "Aged Black Face" that mimics the fade and patina from years of use in a smoky bar environment. Fender Black Face cloth is a close cousin to original Music Man, and the quality is excellent. As a bonus, SBS sells in pre-cut sizes with correct thread orientation which saves waste and $$$'s.

To see the product on MM's, take a look at the photo I posted in the "Brag About Your MM" section of the forum (Orlando MM Stack) . The picture includes "new" vintage grill cloth on the 65 combo in the middle and the RH115 at the bottom. The RH115 also has one of my reproduction logo badges...

Hi. I'm new to this site. I have an HD 130 head. My question. Was there only one style/type grill cloth used on MM' HD 130s? I'm not looking at mine at the moment but what I am seeing in my old brain is a black material on the face. When I look at all the pictures on this site they all seem to have the same cloth. If I am correct in my memory and that there was only one type of cloth used then my amp has at some point been refitted with the wrong cloth. If this is true, where can I get the correct cloth? Thank you. Tim

Thank you for the recommendation. So, was the HD 130 head ever manufactured with any other cloth? As I said, mine has a black cloth on it and the badges are present. If someone replaced it they did a very good job, however, if it is incorrect, I will be replacing it.

the black cloth may be original if it's a later specimen.

Lars,
Hi. Thank you for your comment. It does look very old but in good condition. So, they did at some point use black cloth? Are you good at identifying age by serial number off the plate? It is an HD-130 Reverb 2275. I will have to look at the serial number as I do not remember it. It uses a 12AX7 and the 4 6AC7s tubes if that is a clue at all to it's age. I do believe it is from the 70s but am not absolutely sure. I will upload some pictures if that would be helpful and if you have time to look? I appreciate your time and input. Thanks again, Tim

Adding pictures. Sorry if the quality is less than good. 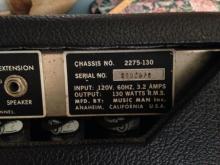 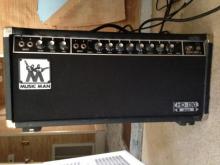 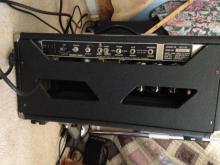 I have an early MM HD "One Thirty" and after a few decades of club and concert gig abuse, the cloth was pitiful, including literally falling apart. I ordered a sample of early 60's Fender Silver and Black grill cloth because I was also was going to recover my two 1964 Super Reverbs, two 63 and 64 Bassman and Bandmaster speaker cabs and this HD One Thirty. The sample was literally identical to the original on the HD, I could see almost no difference. So I ordered a couple of rolls (enough to do all and some spare). See the results on the HD and one of the Supers attached - It's been about 10 years since I did the recovering on all, sorry I don't remember now who I ordered the cloth from (was not Fender) 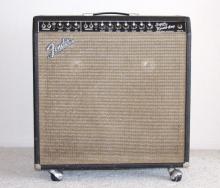