Ok-this was a new one for me!

Wowzers.. Just stepped into the way-back machine with this link. Jenny Jenny was one of our bread n' butter cover tunes plus the tv show Fridays, was one we always tried to watch. Then throw in some MM's on stage to boot.. Good one, Mike.

Good one Mike. Just like Davey said, "Blast from the Past.."

Tommy is still around! Check out his solo career!

I have known Tommy Heath (aka Tommy TuTone) for about 10 years.  I have played with him on-stage locally at numerous jams and at several venues when he ventures out (he lives in Vancouver, Washington, across the river from Portland, Oregon).  Several friends of mine are in his current road-band.  I have also repaired his amps a time or two (although he does not use a Music Man amp currently).  He still actively gigs around the country and works as a software programmer for my cousin's transportation company so we are connected on multiple levels.

While he does capitalize on the popularity of "Jenny" (he was the lead singer in the video w/ the Tele playing through the MM 410 amp) he did not write the song (the lead guitar player next to him wrote it).  He has since written and recorded an impressive body of work in his solo career and this forms the bulk of his performances now.  He RARELY performs "Jenny" locally (as you can imagine, it gets terribly boring to play the same song tens of thousands of times over the last 30 years) but once or twice I have played it on stage with him because I was at the right place at the right time.  It is fun to play (as many of us have done over the years).  It is even more fun when your playing it while Tommy sings it!

This song has certainly been very good to him! 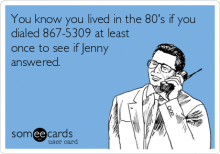